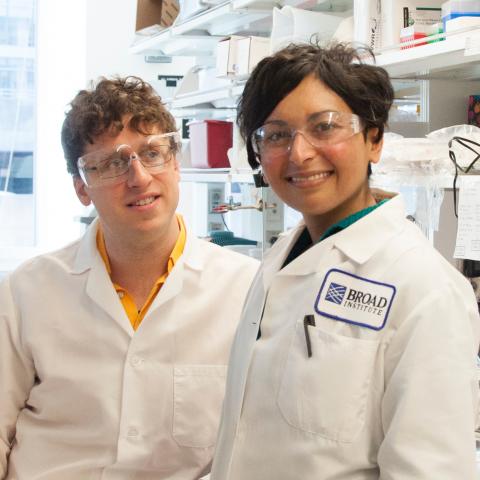 Graduate students at the Broad Institute of MIT and Harvard
@prionalliance

Eric Minikel and Sonia Vallabh are Ph.D. students in Stuart Schreiber's laboratory at the Broad Institute. In 2010, Sonia’s mother abruptly developed and died of prion disease— a rapidly progressive and fatal neurodegenerative disorder caused by the spread of misfolded proteins in the brain. The following year, Sonia learned she had the same mutation that caused her mother’s disease. Thus, Sonia and her husband Eric left their career in consulting to begin studying biology, with the long-term goal of designing small molecule therapeutics for prion diseases.

Eric and Sonia are developing methods and models to study prions, find and test new therapeutics, and identify ways to track the progress of the disease.

We seek to develop a treatment or cure for human prion diseases—fatal neurodegenerative diseases caused by the spread of misfolded proteins throughout the brain. We became interested in this field after learning that Sonia, whose mother died from one of these prion diseases, inherited the genetic mutation for this disease.

In order to discover an effective treatment, we need to be able to test in the lab whether any given chemical compound slows or stops prions from replicating themselves. To do so, we need to survey how many prions there are—something that historically has been very difficult. Most drug discovery efforts for prion diseases have measured prions using slow, imprecise, and labor-intensive biochemical techniques developed in the mid-1980s. This has been a major sticking point in the search for treatments for these diseases.

Over the past five years, scientists have developed a new prion measurement technique called “real-time quaking induced conversion” (RT-QuIC), which exponentially amplifies prions using pure prion protein produced in bacteria. An RT-QuIC experiment is vastly quicker and more sensitive than prior methods: it can be set up in about one hour, returns results within 24 hours, and can detect prions at one part per 100 million. It is already being used in the clinic to diagnose prion disease in cerebrospinal fluid samples, but until now no one has applied it to the search for therapeutics. We hypothesize that we can use RT-QuIC to open a new route to drug discovery by improving our method of testing chemical compounds for their ability to inhibit prion spread.

BroadIgnite has provided critical seed funding to allow us to pursue this hypothesis. Because we are Ph.D. students, there is no obvious route for us to apply for funds for laboratory supplies. BroadIgnite bridged that gap, allowing us to buy a plate reader (the instrument that runs the RT-QuIC experiment), a centrifuge, a homogenizer, and the blender, beads, and columns needed for extracting the pure protein from bacteria.

We have now successfully reproduced the protein purification protocol that was developed for RT-QuIC. We have purified approximately 50 milligrams of prion protein at the Broad and have confirmed its quality by nuclear magnetic resonance. We have recently received prion-infected brain samples, which we will use to validate the RT-QuIC assay and to infect cells with prions. In order to increase the susceptibility of cells to prion infection, we have begun the process of using CRISPR genome editing to replace the normal prion protein gene with a copy of the gene with Sonia’s mutation. These tools will not only allow us to investigate how prion disease develops but also to test new therapies in the lab for a currently untreatable disease—and hopefully save Sonia’s life, and others with similar mutations.

Equally important, the BroadIgnite funds have provided momentum for our new prion initiative at the Broad. Once our project was funded, the Broad's executive leadership allocated a dedicated room where we can safely conduct our prion work—an amazing investment in our cause. The BroadIgnite seed funding and the fact that we now have all of the necessary equipment in place will also be critical to our ability to receive further financial support for our efforts.