MCL1 is one of the most common culprits in cancer. Multiple copies of the gene are often present in tumors, each encoding a protein that interrupts programmed cell death and fuels the growth of cancerous cells.

For decades, scientists have been trying to develop drugs that block the MCL1 protein, but they have so far failed. Thanks to initial catalytic support from the Robertson Foundation and follow-on funding from the Carlos Slim Foundation, Broad researchers have recently made an important breakthrough: the identification of a small molecule that appears to inhibit the protein’s activity. While testing is still in the early stages, this molecule is a promising drug lead.

To better understand how to target the protein, researchers drew on several of the Broad’s critical resources, including the recently published Cancer Cell Line Encyclopedia, which provides public access to genomic data, analysis, and visualization for hundreds of cell lines. They also relied on the Institute’s RNAi screening capabilities.

Researchers began by suppressing MCL1 in cancer cell lines, and then looked for a genetic signature that accurately predicted which cell lines were dependent on MCL1. The gene BCL-xL—which also protects against cell death—was the best predictor. In its presence, cancer cells can survive even when MCL1 is turned off. 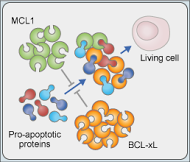 These results led Broad scientists to predict that in cancer cells where both genes are highly expressed, combination therapies that target both genes could effectively treat the tumor. Drugs targeting BCL-xL are currently in clinical trials, so researchers sought to identify chemical compounds that turned off MCL1. In a screen of nearly 100,000 chemical compounds, they identified the natural compound triptolide as a possibility.

The search for more MCL1 small-molecule inhibitors continues. A number of anti-cancer drugs currently in use have the effect of tamping down MCL1, and this study is helping scientists identify which tumor types—and therefore, which patients—might be most responsive to those drugs. Our researchers have also created an altered model of the MCL1 protein, which will enable further insights into how it works.

Broad’s research into so-called “undruggable” cancer targets is part of a broader effort to provide a roadmap for new cancer treatments. Led by Todd Golub, a leading cancer researcher and clinician, the Broad’s Cancer Program has been the flagship of international efforts to map the cancer genome, contributing more than 50 percent of the cancer genome data publicly available. Working with our partner institutions, the Broad has also helped pioneer precision medicine in cancer, allowing clinicians to sequence tumors and tailor treatments to patients.

Currently, precision medicine benefits only a small minority of patients. In order to ensure that many more benefit, the Broad is working not only to complete the catalog of genetic mutations behind cancer, but also unearth the specific vulnerabilities of major types of cancer, develop new cancer cell lines, and understand the mechanisms of cancer drug resistance.