Each cell in our body contains a thick, unique soup of proteins, culled from our genome’s recipe book. Yet, until now, identifying all the proteins at work in rare cell types—these cells’ proteome—without looking only at the usual suspects has been impossible. Analyzing the proteome with the standard method, the chemical identification technique mass spectrometry, simply requires far too many cells to study small but critical populations, such as immune cells at the root of autoimmune disorders.

Sam Myers, a postdoctoral researcher in Steve Carr’s proteomics group at the Broad, is taking on this challenge. With the support of Scientific Projects to Accelerate Research and Collaboration (SPARC)—a seed funding mechanism at the Broad, made possible through philanthropic investment—Sam has significantly reduced the number of cells needed to study the proteome, enabling researchers to answer entirely new biological questions. He explains in the conversation below, condensed and edited for clarity.

What are you working on?

Typically, proteomic experiments require about 100 micrograms of protein per experimental condition, and if you want to measure several different conditions you need a large amount of protein. Which is no problem for cell lines, but once you start looking at tumor samples derived from patients or immune cells, you just can’t get enough starting material. If you ask an immunologist for 100 micrograms of T cell protein, they’re going to leave the room.

So my big theme has been reducing the input requirements, but still getting the same depth and quantitative coverage of the proteome. We think we’ve gotten as far as we can right now with standard instruments, and we’ve reduced it from 100 micrograms to about two micrograms.

That opens up a lot of doors. We’ve started doing a lot more immunology experiments, because immunologists and mass spectrometrists have basically given up on each other. Now, we’ve gotten to the point where we can do experiments that immunologists want to do in cell types that are interesting. For example, with Aviv Regev’s and Vijay Kuchroo’s groups, we’re studying the protein differences between nonpathogenic Th17 cells—immune cells which protect us from all sorts of things—and pathogenic Th17 cells that cause autoimmune disorders. We’re also close to wrapping up a project to profile the proteome of 11 major immune cell types in mice. We can do quantitative proteomics on all of them, and we’re about 6,000 proteins deep into each cell type. 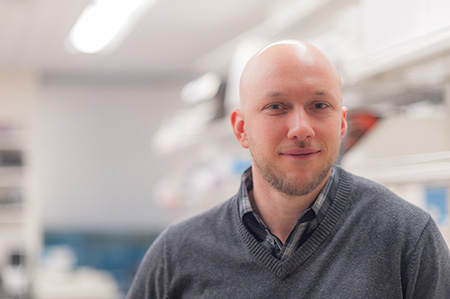 Why does it matter to do quantitative proteomics on these small samples?

The scientific community is very good at measuring the levels of RNA in cells—the molecules that provide the recipes for protein—but the number of RNA molecules doesn’t always correlate with the number of proteins. So measuring protein levels gives you a more direct look into the activity of the cell.

Moreover, when a cell senses a change in its environment, proteins are chemically modified in a matter of minutes or even seconds to relay the outside world’s message to the inside of the cell. These changes occur much faster than changes to RNA, and can be measured by mass spectrometry.

So low-input proteomics, drawing on a much smaller number of cells, opens up a whole new realm of experiments we can do and samples that we can analyze. For example, we can now study how immune cells mature, or how they know to attack a cancer cell and not a healthy cell. Or why they sometimes attack healthy tissues in autoimmune disorders. I showed some of my data at an immunology conference in January and people were just blown away. We can start doing a lot of biology and immunology that people have wanted to do but we had no way to do.

Another obvious example would be patient samples. We’d rather study small tumors that were caught early, and we also don’t want to take a huge amount of healthy tissue for comparison. So we can take a needle core biopsy or a laser capture microdissection and hopefully use just a small amount of the sample and still go deep enough into the proteome. This allows us to connect genetic errors to changes in the response to the environment in cancer cells—and identify proteins to target with therapeutics.

When you’re not in the lab, what do you like to do in Boston?

There’s not much time that I’m not at work, but I like to ride my motorcycle, especially in the fall when I go leaf peeping. I try to go camping a little bit. I like to weight lift—I’m trying to get to the 1,000-pound club, which requires squat, bench press and deadlift to all add up to 1,000 pounds. I’m almost there. I’m at about 950.

Read more about young researchers at the Broad