When he was 19, Monkol Lek felt what it was like to be paralyzed.

A doctor had prescribed him a relaxant for his weak and aching muscles. The relaxant briefly rendered Lek immobile. “I remember lying there, not being able to move,” he recalled.

As a next step, the doctor conducted a blood test for creatine kinase (CK), a chemical released into the bloodstream by damaged muscles. Lek’s CK levels were so high, the doctor asked if he’d just run a marathon. Eventually, the doctor diagnosed him with limb girdle muscular dystrophy (LGMD), a catchall description for a variety of rare, often late-onset muscle weakness diseases. As it happened, one of his six siblings also had the condition.

Yet despite the clinical diagnosis, and the knowledge of his older sister’s LGMD, Lek remained in a state of denial. In his head were the faint traces of how his elders would rebuke him for being lazy if he complained of fatigue.

Lek pressed on. After earning his bachelor’s degree in computer engineering at the University of New South Wales (UNSW), he took a job at IBM as an IT security professional. Every six months, he saw a team of neurologists. For years, they confirmed what Lek already knew: his muscles were abnormally weak.

Frustrated by the lack of a cure for his condition, Lek decided to contribute to scientific research about its genetic origins. He left IBM and returned to UNSW in 2004, earning bachelor’s degrees in physiology and bioinformatics. Armed with this new background, he pursued a doctorate in medicine at the University of Sydney, focusing on muscle research.

It was there he met Daniel MacArthur, now an institute member and co-director of the Program in Medical and Population Genetics at the Broad Institute. The two quickly bonded. Lek admired MacArthur’s ability to frame high-level scientific questions. MacArthur, for his part, appreciated Lek’s cheerful work ethic and strong programming skills. Lek’s immersion into genetics compelled him to finally seek a molecular diagnosis of his LGMD, identifying the genetic variant responsible for the disorder. As it turned out, the LGMD gene was recessive in both of Lek’s parents. So it made statistical sense that roughly 25 percent of their children (in this case, two of their seven kids) had inherited it.

In 2012, MacArthur came to the United States to develop a research program in rare genetic diseases at Massachusetts General Hospital (MGH), the Broad, and Harvard Medical School. Shortly thereafter, at MacArthur’s behest, Lek joined him. Together again, MacArthur, Lek, and their colleagues are plying the tools of genomics to shorten the diagnostic journey for other families. 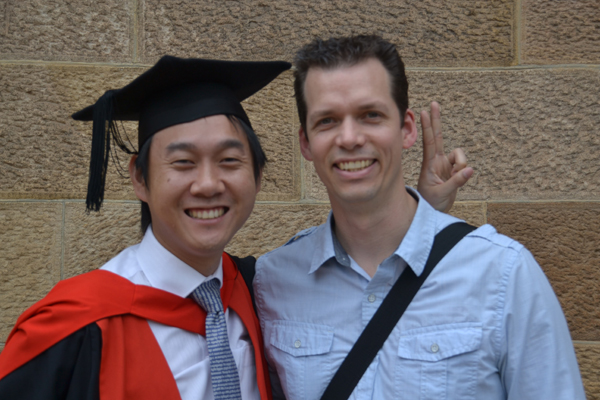 MacArthur’s clinical collaborators conduct initial screens of patients with rare muscle diseases. They use muscle biopsies and targeted sequencing to determine the cause. If they don’t find the answer, and the researchers have evidence that the disease is genetic, they’ll send the patients to MacArthur’s group for analysis. Once MacArthur and his team receive the samples, they sequence the protein-coding genes, or exome, of the patient and her family members. Next, they comb the data, seeking changes to genes that might result in faulty proteins causing the disease.

If they don’t find one, they bring out more powerful tools: whole-genome sequencing and RNA sequencing. Ascertaining the code of the entire genome allows the researchers to find larger rearrangements of the genetic sequence that might disrupt genes.

Now, thanks to support from BroadIgnite, a fund for young researchers with bold ideas, MacArthur’s team is adding another technique to its toolkit. Led by graduate student Beryl Cummings, the team is sequencing the muscle cells’ RNA—a record of the genes those cells express. The team then compares the expressed gene sequence to the original genomic template to determine the functional consequences of changes in the genome’s sequence. That allows researchers to identify changes like the appearance of hidden signals adding extraneous parts to the protein encoded by the gene.

So far, the approach has confirmed diagnoses of 12 patients with known mutations. Moreover, the approach has solved 16 of 49 cases that had received unsatisfactory answers through other methods. “It really is a very powerful technology for picking out things that we miss with the standard DNA sequencing approaches,” MacArthur said.

These diagnoses can change the lives of patients and their families, who spend years just trying to find out what is wrong with their loved ones. They allow families to reach out to others with the same disease, forming advocacy and support networks.

They can even lead to treatments. For example, one of Lek’s projects identified patients initially diagnosed with LGMD who actually suffer from Pompe disease—a condition treatable by replacing a missing enzyme. Eventually, 1,000 patients will be sequenced for this project. Eight of them have already benefited from the new therapy. “That’s the most satisfying feeling—to be able to help someone,” said Lek. “That’s one of the reasons I got into research.”