Exploring the Genetic Origins of IBD

Crohn’s disease and ulcerative colitis, collectively known as inflammatory bowel disease (IBD), are chronic, debilitating illnesses. To date, scientists have uncovered more than 150 common genetic variants associated with the disease. But they still lack a complete picture of how and why IBD develops.

Ramnik Xavier and Mark Daly believe they can change this. With the help of funding from the Leona M. and Harry B. Helmsley Charitable Trust, they have assembled a team of Broad Institute and Massachusetts General Hospital scientists that is searching for rare genetic variants that contribute to IBD risk. 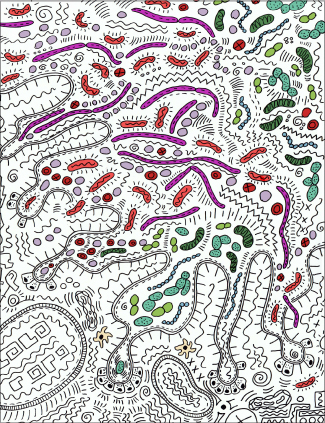 The trillions of microbes in the gut are part of a delicate ecosystem. An imbalance within that ecosystem can lead to severe consequences, including illnesses such as Crohn’s disease. Image courtesy of Sigrid Knemeyer

Scientists have previously searched for the genetic origins of IBD using genome-wide association studies (GWAS). But GWAS—large scale studies of common variation—can only pinpoint variations in DNA that are present in at least one percent of people. Scientists suspect that a substantial amount of the disease’s heritability is caused by strong-acting, rare genetic variants.

Exome sequencing—which involves sequencing the protein-encoding parts of all genes—is the technique used to reveal rare mutations, and requires massive amounts of data. So the Broad/MGH team has partnered with researchers worldwide to develop a collaborative exome sequencing network.

The pilot phase of this study has two arms. The first targets patients who developed IBD before the age of six. The information gleaned from this study will be particularly valuable to researchers, because penetrant genetic risk factors, or mutations in people who have symptoms, are most frequently found in cases with unusually early onset.

The second study focuses on adult-onset IBD. In this project, researchers are comparing IBD cases with an unusually low burden of known genetic risk factors to population controls with an extremely high burden of risk factors. In this way, they hope to pinpoint previously undetected mutations that contribute to the disease.

Xavier and Daly hope these two projects will further scientists’ knowledge of the molecular underpinnings of IBD, and ultimately lay a critical foundation for discovering new drugs that could help prevent and treat Crohn’s disease, ulcerative colitis, and related diseases.